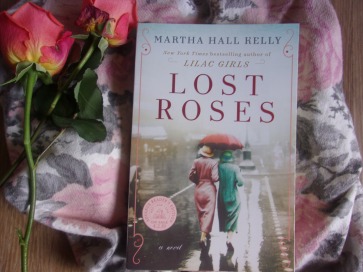 This novel is a prequel to  The Lilac Girls and features the real life heroine Caroline Ferriday. The world is in turmoil and edging toward World War One. We learn about Caroline’s mother, Eliza and two other women that are thrown into the intense situations they faced in 1914. Eliza is the connection between the two novels – The Lilac Girls and Lost Roses, but this one could easily be read as stand-alone.

The story follows the lives of three women. Eliza who is a socialite and lives in Manhattan. Her friend Sofya Streshnayva,  is a cousin of the Romanov’s, the reigning dynasty in Russia. While visiting her in St. Petersburg, Eliza becomes aware  that war is imminent and fears for her friend Sofya, who seems unaware of the danger that could come. When war is declared, Eliza heads back home to America.

Varinka Kozlov is a Russian girl, who the Romanov family hire to help in their household. She is the daughter of a well-known fortune-teller and her situation is dire.  I tried to imagine the helplessness that she felt when she had to make some dangerous decisions. Varinka and her mom are under the thumb of some dangerous men that are involved in the local uprisings. Lets just say, she has a lot going on. and makes some decisions that will impact all of these women. A story of three strong, determined women and their quest for survival.

While this story is not as fast-paced as Lilac Girls, the characters are compelling and the author’s research of the period was evident.  There are some “hold your breath” moments towards the end, and  I feared for what was to come. I was invested to find out how each of their stories would play out.

It is 1914 and the world has been on the brink of war so many times, many New Yorker’s treat the subject with only passing interest. Eliza Ferriday is thrilled to be traveling to St. Petersburg with Sofya Streshnayva, a cousin of the Romanov’s. The two met years ago one summer in Paris and became close confidantes. Now Eliza embarks on the trip of a lifetime, home with Sofya to see the splendors of Russia. But when Austria declares war on Serbia and Russia’s Imperial dynasty begins to fall, Eliza escapes back to America, while Sofya and her family flee to their country estate. In need of domestic help, they hire the local fortuneteller’s daughter, Varinka, unknowingly bringing intense danger into their household. On the other side of the Atlantic, Eliza is doing her part to help the White Russian families find safety as they escape the revolution. But when Sofya’s letters suddenly stop coming she fears the worst for her best friend.

From the turbulent streets of St. Petersburg to the avenues of Paris and the society of fallen Russian emigre’s who live there, the lives of Eliza, Sofya, and Varinka will intersect in profound ways, taking readers on a breathtaking ride through a momentous time in history.