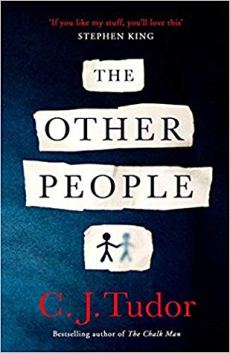 Definitely not your run of the mill thriller by any stretch.

The Chalk Man was one of my favorites in 2018 and I was thrilled to get my hands on this early release!

My attention was captured from the very first chapter. Page-turner alert! The Prologue gave me all the spookish vibes and intrigue that carries throughout the book – All the way to the very end.

The creepy factor is center stage, but there is also an emotional story of a family that suffers loss, a father that won’t let go, and dare I say…. The Other People.

Just follow the footpath, don’t trust anybody, pay attention and be careful what you wish for!

I can’t say more. I don’t want to give anything away.

Flippin Fantastic page turning fun with just a slight breeze of the other side. Don’t ask, not telling.

Thanks so much to the publisher for my review copy. Highly Recommend. OUT Feb 2020.

Three years ago, Gabe saw his daughter taken. In the back of a rusty old car, covered in bumper stickers. He was driving behind the car. He watched her disappear. But no one believes him. Most people believe that his daughter, and wife, are dead. For a while, people believed that Gabe was responsible.

Three years later and Gabe cannot give up hope. Even though he has given up everything else. His home, his job, his old life. He spends his days and nights travelling up and down the motorway, sleeping in his camper van in service stations, searching for the car that took her. Searching for his daughter.

Katie spends a lot of her life in service stations, working as a waitress. She often sees Gabriel, or ‘the thin man’ as she has nicknamed him. She knows his story. She feels for him, because Katie understands what it’s like to lose a loved one. Nine years ago, her father was murdered. It broke her family apart. She hasn’t seen her oldest sister since the day of the funeral; the day she did something terrible.

Fran and her daughter, Alice, put in a lot of miles on the motorway. Not searching. But running. Trying to keep one step ahead of the people that want to hurt them. Because Fran knows the truth. She knows what really happened to Gabe’s daughter. She knows who is responsible. And she knows that if they ever find them, they’re dead.