#BookReview: The Breakdown by B. A. Paris @StMartinsPress @BAParisAuthor 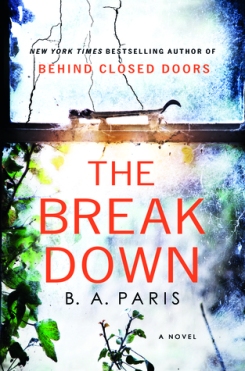 What a ride this was! It actually had me on edge and checking around corners (very edgy). Some people may not enjoy the downright frantic tone, but I was hooked! The tone does get a bit monotonous as it never lets up, but that did not deter me! And the ending was sweet!

What is going on with the narrator, Cass?
Is she losing it?
Having a breakdown?
Does she have a stalker?
Is someone watching her?
Does someone want to murder her?
Is her medication getting to her? / Does she need medication??

Cass saw a woman broke down on the side of a wooded road in the pouring rain. She didn’t want to get out of the car at night (especially on the dark Blackwater Lane) and decided the woman wasn’t in distress so she left and continued home.

The next morning, Cass has heard that a woman was murdered around the time she pulled over on
Blackwater Lane. She feels terribly guilty, but what should she do? Did the murderer see her that night? Is she perhaps in danger?

Cass experiences fear of the phone ringing and the letter box clattering. She spends time eating lunch at Sour Grapes (really who would eat there?) with a friend just so she is not at home alone.

This book reminded me of the tone of A Stranger in the House by Shari Lapena (which I loved). Most thrillers have a twist or two, and perhaps a knock-out ending, but this entire book was twisted with a double punch ending!