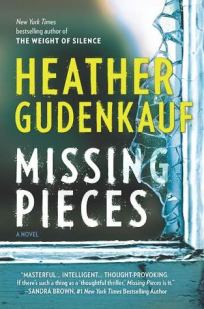 I found it to be a quick and well-paced book that I enjoyed. It had just enough action and suspense to keep me turning the pages without being bored.

Sarah has been married to Jack for 20 years and she thinks she knows him well, but he has secrets! The kind of secrets that can devastate, destroy, and shatter a marriage. Can she trust him or is she in danger? Jack’s home back in Penny Gate has been referred to as a “house of horrors” by Jack’s sister Amy. Why? What kind of secrets does this house of horrors possess?

Jack hasn’t returned home for many years because he is haunted by the death of his mother and the mystery that surrounds what happened to her. He has never told Sarah about his involvement or the accusations he faced. Was he involved or falsely accused?

The story is a who-dunnit and Sarah plays the self-appointed detective. She treads carefully and questions everything and everyone. Who can she trust? After all, her life and marriage are at stake here! There were several characters that had motives and I worked hard trying to put all the pieces together. It did surprise me! This book is just creepy enough, but not too graphic (which I like).

If you enjoy a fast and entertaining who-dunnit set in a gloomy town with a decrepit house, this one might be for you!  If you have a favorite book from this author, let me know as I am interested in reading another from her!

Sarah Quinlan’s husband, Jack, has been haunted for decades by the untimely death of his mother when he was just a teenager, her body found in the cellar of their family farm, the circumstances a mystery. The case rocked the small farm town of Penny Gate, Iowa, where Jack was raised, and for years Jack avoided returning home. But when his beloved aunt Julia is in an accident, hospitalized in a coma, Jack and Sarah are forced to confront the past that they have long evaded.

Upon arriving in Penny Gate, Sarah and Jack are welcomed by the family Jack left behind all those years ago—barely a trace of the wounds that had once devastated them all. But as facts about Julia’s accident begin to surface, Sarah realizes that nothing about the Quinlans is what it seems. Caught in a flurry of unanswered questions, Sarah dives deep into the puzzling rabbit hole of Jack’s past. But the farther in she climbs, the harder it is for her to get out. And soon she is faced with a deadly truth she may not be prepared for. (less)